Chronograph for Airsoft use, released as Free Open Source hardware and software!

Fixed mounting on the front of the gun in the style of a silencer.

Can optionally also include UV LEDs to illuminate tracer BBs.

Please also take a look at the write-up on my website!

Use the included OpenSCAD design file in hardware/openchrono.scad to render your own custom STLs that fit your use-case.

Besides some common stuff like soldering wire and hotglue you need the following parts to build this project.

For the UV tracer option you also need the following parts.

You have different options for powering the project. My first version for testing uses a pre-made AA battery holder.

The originally intended variant is a AAA battery holder printed into the model. I don’t have the terminals for that yet so it is not finished.

The AA and AAA options are not recommended due to their bulk and weight! They also have problems with disconnections on firing impulses.

The preferred version uses a single LiPo cell and a charger PCB.

Be careful though! If you use the LiPo charger board, they normally come with the charge current set to 1A with a 1.2k Ohm resistor. You need to put in a higher valued resistor instead, otherwise the small battery will be charged with far too much current and the charger will get very hot. I recommend 4k Ohm or more. See this page for more info. 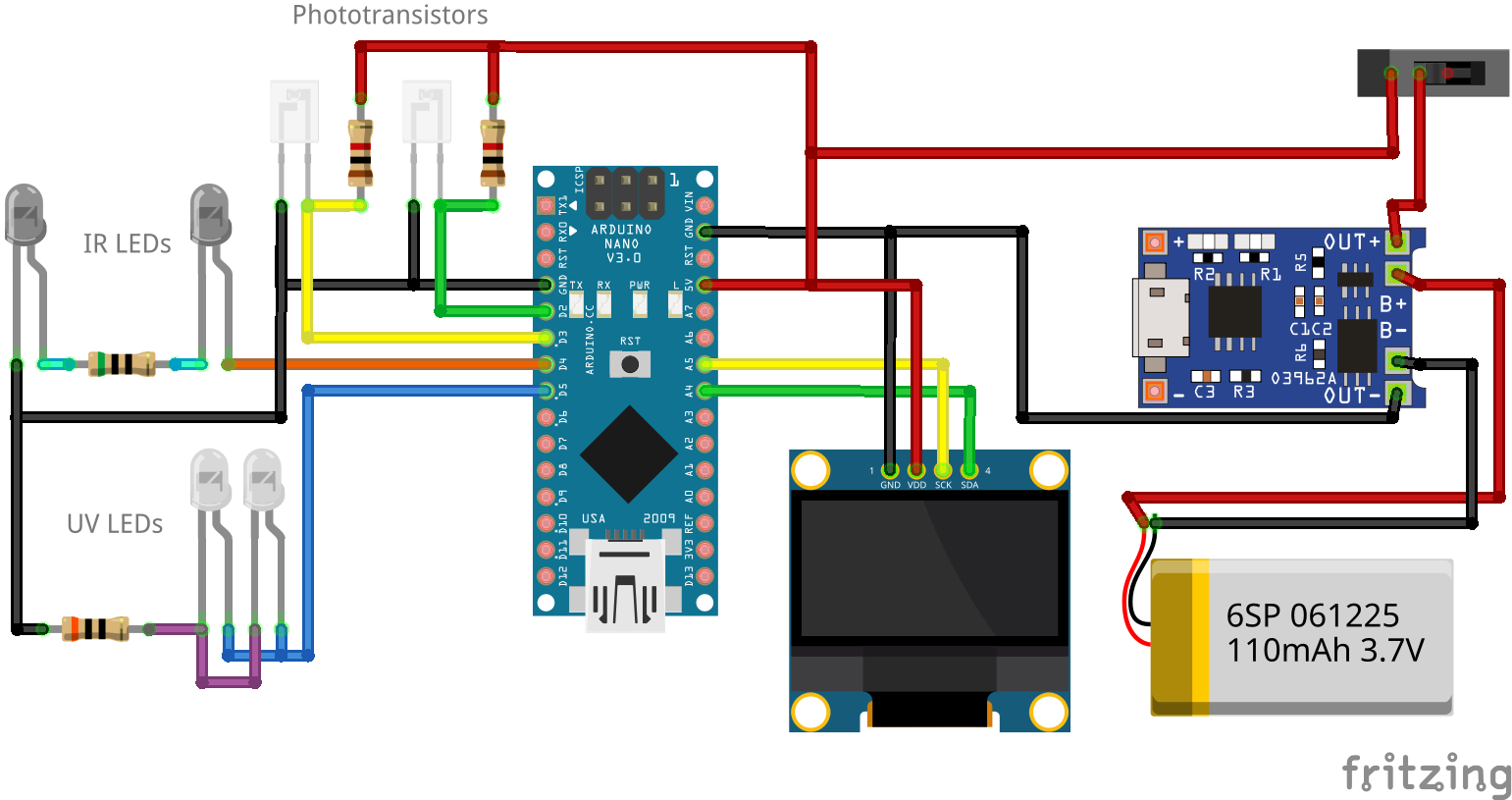 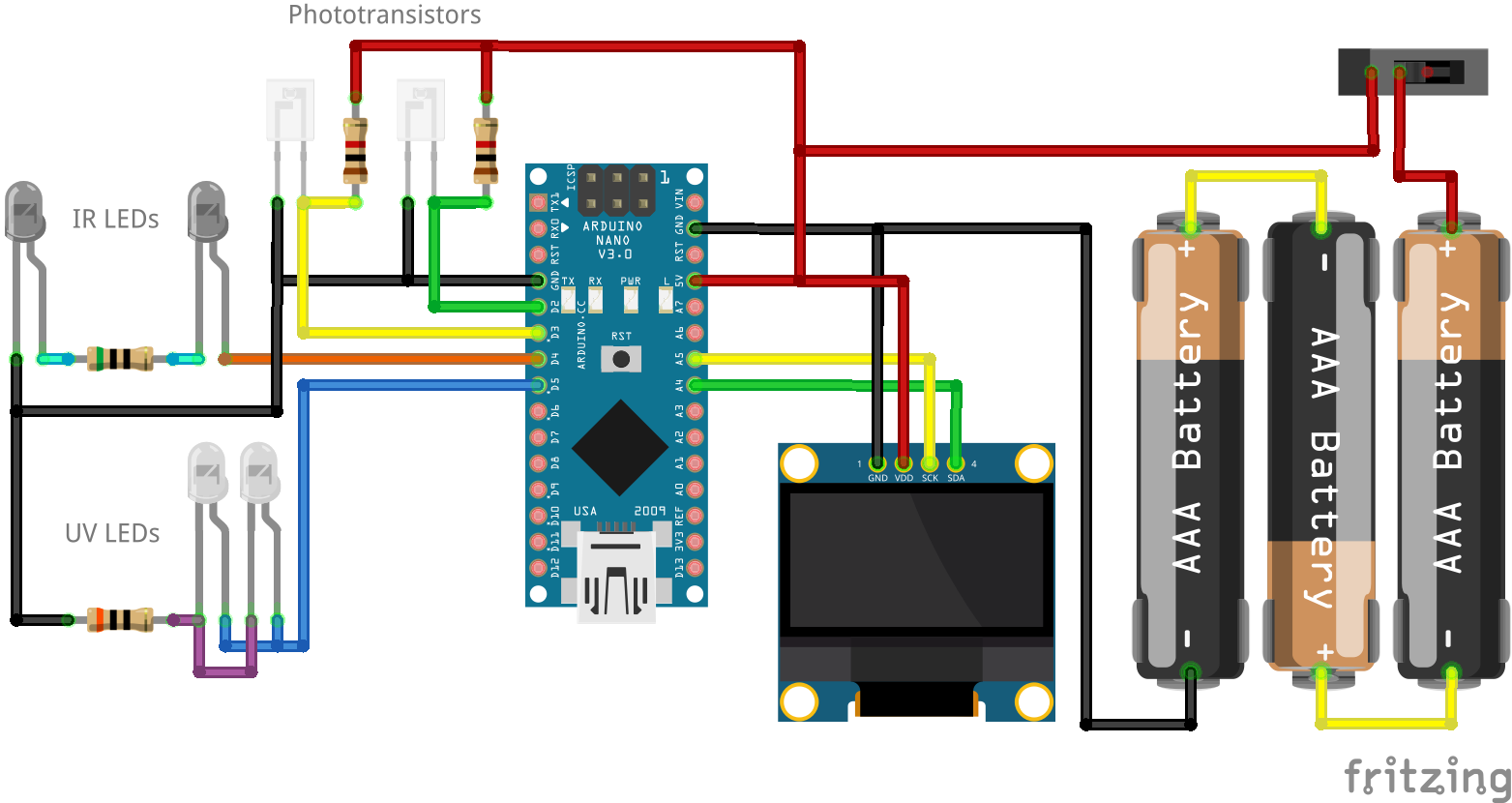 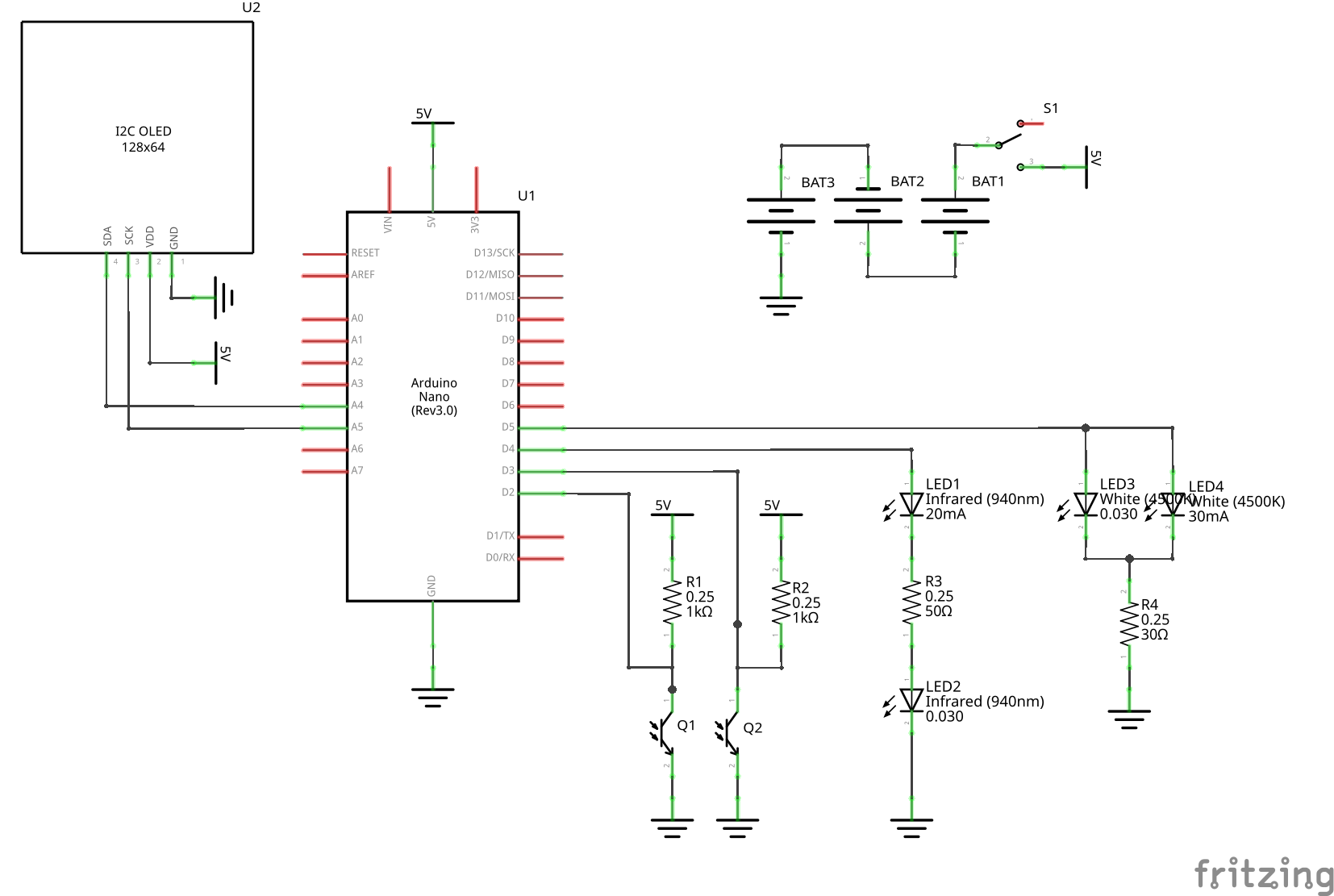 The proper values for the IR LED current-limiting resistors, as well as the pull-up resistors for the phototransistors depend on the exact parts used. We want to run the transistor in “switch mode”, as described here. So we need to keep the pull-up value low enough that it quickly is able to pull the IO back to high when the BB passes. At the same time we also want the LED resistor as low as possible, so the transistor properly switches the IO to low when the light is shining on it.

I built a first prototype with potis instead of resistors on the outside of the case, to be able to adjust the values while measuring the outputs with an oscilloscope. Using this setup, I arrived at values of 100 Ohm for the LEDs at 4V supply voltage, and 1k Ohm for the phototransistors. When I later ran again with batteries that had a bit lower voltage, it no longer worked reliably. So for use with 3x AA(A) batteries, I went down to 50 Ohm for the LEDs.

Also note the type of the phototransistor, “SFH 309 FA-5”. The ‘5’ at the end gives the current that passes when light shines on the sensor, in this case 1.6mA - 3.2mA. So if you use a different sensor you will probably have to adjust the resistor values!

This project uses the U8g2 library by olikraus to draw to the I2C OLED display.

You can compile and flash the software using either PlatformIO or the standard Arduino IDE.

With the Arduino IDE install the U8g2 library using the Library Manager and then flash as usual.

Replace /dev/ttyUSB0 with the port you are using.

Take a look at firmware/OpenChrono/config.h. This file contains all the settings you can change as a user.

The most important setting is SENSOR_DISTANCE, which is given from the 3D model of the case. It is echoed when rendering the OpenSCAD design.

You can set BB_WEIGHT to the one you use most commonly, and BB_WEIGHTS to others interesting for you (BB_WEIGHTS should include BB_WEIGHT). These values are used to calculate the energy in Joules.

Set PREFERRED_UNITS to what you would like to see in the 2D graph.

The range of speeds that can be measured is determined by TIMER_PRESCALER. Take a look at the comment in firmware/OpenChrono/ticks.cpp for details.

OpenChrono is licensed under the GNU General Public License.